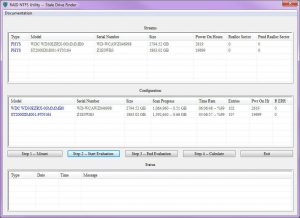 DTI Data over the years has recovered hundreds of raids. The majority of those raids were usually in an enterprise environment and consisted of several enterprise caliber drives in a raid five configuration. In the vast majority of instances where these raids fail there has been a drive that has been degraded and no longer functioning in the array. The time frame for this degradation could be as short as a day, or as long as several years. Many times this drive is not damaged but may have had a slow read or a slow write and the firmware of the raid card decided to pull the drive from the array. Typically this is due to synchronization problems and or a very fussy fault tolerant algorithm that pulls a good drive from the array. This scenario can be seen over and over again and is very dangerous.

Once degraded, the raid five then becomes a pseudo raid zero and is susceptible to the same fault criteria as any configured raid zero. When the second drive fails, as it always does, the technician may try several approaches to recover the raid. One of those approaches is to force the degraded drive back online and then bring the raid up using the stale drive. I am sure it goes without saying that the stale drive is now part of an active data set can cause all types of havoc including destroying the raid stripe, and in many cases initiating a ‘chkdsk’, or an ‘fdisk’, that will virtually obliterate an otherwise healthy file system. It is these cases that the Stale Drive Finder can help save a client’s data.

As a technician, when your raid five fails it is always good to see if in fact you have a drive that has been degraded in the array. You can do this by looking through the logs of most raid cards, or soft raids. These logs however can be very large and if a drive fell out of the array several months ago then the possibility of seeing which drive failed has already scrolled out of sight. Certain raid cards and accompanying firmware can lead you to the fact that you may have a stale drive in the array. This method is available in just a few raid cards and a set of particular set of firmware. In order to get a better idea on which drive may be a stale drive a more comprehensive method of discovery must be used.

Stale Drive Finder offers the technician an easy solution to ascertain which drive in a failed raid five was degraded before the raid failed.

The software uses clues found within the drive itself to help identify which drive may be the stale drive. With a few clicks of the simple interface and a ten to fifteen minute evaluation Stale Drive Finder can help the technician find the offending drive and eliminate it from a rebuild, or external recovery. Stale Drive Finder is not by any means flawless but will be an excellent addition to the other analysis methods that can in fact lead the technician to identifying which of the drives is stale.

DTI Data offers a software tool that is small, fast, and easy to use in Stale Drive Finder. It is a must for all technicians who are serious about their data recovery business and clientele. It goes without saying that Stale Drive Finder can and will help any technician recover those raids that exhibit stale drive tendencies so be sure to add it to your tool set.